John Landis, A Man of Many Genres

By his own admission, John Landis is a film geek. His love of cinema started when he was a kid and encompasses everything from Laurel & Hardy to Disney, from Bunuel to B-movies, from monsters and fantasy to animation and musicals. This robust passion for an array of genres goes a long way toward explaining the subversive, genre-bending spirit that makes his work distinctive. As Guillermo del Toro wrote of him, “One genre at a time is not enough to contain his enthusiasm.”

Constantly upending convention and reinventing genres, Landis began his career in the Fox mailroom at the dusk of the studio system. In addition to making Kentucky Fried Movie, Animal House, The Blues Brothers, Trading Places, ¡Three Amigos!, Coming to America, An American Werewolf in London, Innocent Blood, “Masters of Horror” as well as the “Thriller” music video and the documentary Slasher, about used car salesman, he has also starred as a gorilla, sent Raquel Welch’s bra to Vietnam, been killed by Toshiro Mifune, written the book Monsters in Movies and shared his infectious love of film through countless book forwards and documentary interviews.

Just as a single genre can’t contain his enthusiasm, nor can a single hour. But we’ll see what happens. 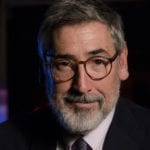