Film history is full of brothers; household names like Marx, Warner, Wayans and Coen. Cinema’s very origins lie in the ingenuity of two brothers, August and Louis Lumiere. And then of course there’s the array of onscreen brothers – Corleone, Corsican, Malloy, Blues.

But take it from Mindy Kaling (in her introduction to Like Brothers) none of them can hold a candle to Mark and Jay Duplass, who have quietly forged one of the most fiercely creative, fiercely independent, fiercely collaborative partnerships in film and television. And they’ve done it as multi-hyphenate writers, directors, producers and actors whose work (in various capacities) includes The Puffy Chair, Baghead, Cyrus, Togetherness, Animals, Safety Not Guaranteed, Transparent, The League, Skeleton Twins, Tangerine, Jeff, Who Lives at Home and…a brand new book.

A “memoir in essays” Like Brothers explores their lifelong personal and professional partnership, taking us back to childhood and the suburbs of New Orleans, to cable television and an unwieldy camcorder (yielding their first movie, a five-minute saga of karate master vs. robber) and to their formative college years. It offers insights into creative collaboration, Hollywood success, love and real estate. It even explores people-watching at airports and the hidden virtue of Karate Kid II.

The Duplass Brothers share the joys and frustrations of intimate collaboration, their myriad inspirations and how the hell they came up with a joint “Top 10 Films of All-Time.”

LFLA Members are invited to enjoy an exclusive reception following the program. 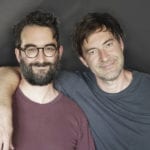 Mark Duplass and Jay Duplass are the critically acclaimed filmmakers behind The Puffy Chair, Baghead, The Do-Deca-Pentathlon, Cyrus, and Jeff, Who Lives at Home. For HBO, they wrote and directed Togetherness, produced the animated series Animals, and created the anthology series Room 104. Their producer credits also include the Netflix documentary series Wild Wild Country and the feature films Safety Not Guaranteed, The Skeleton Twins, and Tangerine. As an actor, Mark has appeared on the hit comedy The League and in such films as Your Sister’s Sister, The One I Love, and Blue Jay, while Jay has a leading role on the Golden Globe–winning series Transparent and has appeared in such films as Landline, Beatriz at Dinner, and Outside In. Both brothers had recurring roles on The Mindy Project.