War used to be a temporary state of affairs, but in today’s post 9/11-world America’s wars are everywhere and forever. Law professor and Foreign Policy columnist Rosa Brooks’ book, How Everything Became War and the Military Became Everything: Tales from the Pentagon, traces what happens when the ancient boundary between war and peace is erased. Part reportage and part memoir, this thought-provoking book is directly informed by Brooks’ unconventional perspective—she is a former top Pentagon official who is the daughter of two anti-war protesters. Examining the political, military, and cultural shifts in times of persistent wars, Brooks joins Los Angeles Times Editor Nick Goldberg to consider the risks facing America’s founding values, laws, and institutions. 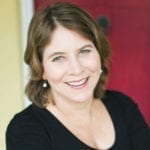 Rosa Brooks is the daughter of left-wing anti-war activists and the wife of a US Army Special Forces officer. Her varied career has included work for international human rights NGOs and a recent stint as a high-level Pentagon official: from 2009 to 2011, Brooks served as Counselor to Under Secretary of Defense for Policy Michèle Flournoy, one of the Pentagon’s highest ranking civilians. Over the years, her work has brought her to dozens of countries around the globe, from Afghanistan, Iraq, China and Indonesia to the Balkans and Sub-Saharan Africa. Brooks is currently a tenured law professor at Georgetown University Law Center and a Senior Fellow at the New America Foundation. She is an expert on international law, constitutional law, human rights and national security law, and has authored dozens of scholarly articles on these subjects, along is co-author of  Can Might Make Rights? The Rule of Law After Military Interventions. Brooks currently writes a weekly column on war, politics and the military for Foreign Policy magazine. She lives in Alexandria, Virginia, with her husband, children, and her dog. 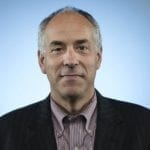 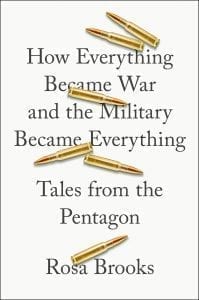 How Everything Became War and the Military Became Everything
[HARDCOVER] – $29.95
By Rosa Brooks