The Theatre at Ace Hotel
close

ALOUD is proud to sponsor Pop-Up Magazine: Fall Issue —a night of new, true stories about the fascinating world around us. With photography, film, radio, and original music all mixed together and performed live onstage by a big cast of talented people.

Afterward, performers, producers, and the audience stick around for drinks and conversation.

The show is not recorded. You have to be there to see it. 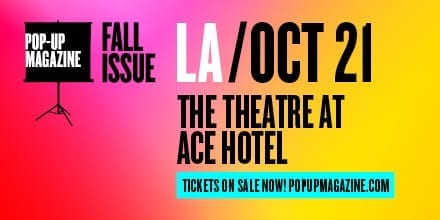