Just three weeks on the job as Director of Central Library, we sat down with the head of Los Angeles Public Library’s bustling epicenter. Although Eva Mitnick is new to the position, the Los Angeles Public Library pulses through her blood. She literally grew up in the Library—her mother was manager of the Malabar branch and of the Northeast Area, so Mitnick spent her Saturdays as a child tagging along to all of those libraries. Since 1987, she has worked in the Library system herself—beginning as a student librarian, to a children’s librarian at several branches, to branch manager at Robertson, to most recently the Coordinator of Children’s Services at Central, where she masterminded such innovative programming as Full STEAM Ahead. Now responsible for the nuts and bolts of Central Library like staffing, security, and maintaining the historic building, Mitnick is also tasked with transforming one of our city’s most beloved educational and cultural institutions for a new era. Here’s what she envisions for the future, and she also shares a list of must-see exhibits opening soon at Central Library–including Changing America–opening in the Getty Gallery this weekend.

Although you only started your new position after Labor Day, you’ve actually worked out of Central Library for over eight years. What do you love about this place?
Mitnick: I love the architecture and the Rotunda. I love the weird features like the sphinxes and all the symbolism. There’s a statue of civilization that’s between the sphinxes on the second floor near the Teenscape and Getty Gallery. That one statue has so much symbolism on her—she has a headdress with the bear of California and a tiny replica of City Hall. She’s got her staff on a turtle, which symbolizes dominion over earth and ocean. It goes on and on. I love all the details of the Library—the tile work is so gorgeous. Then there’s the amazing collection—from the Menu Collection to the Photo Collection, and on. There’s the periodical pool way down in Lower Level 4 where there are old issues of newspapers and magazines and you can leaf through a Harper’s Bazaar from 1927. 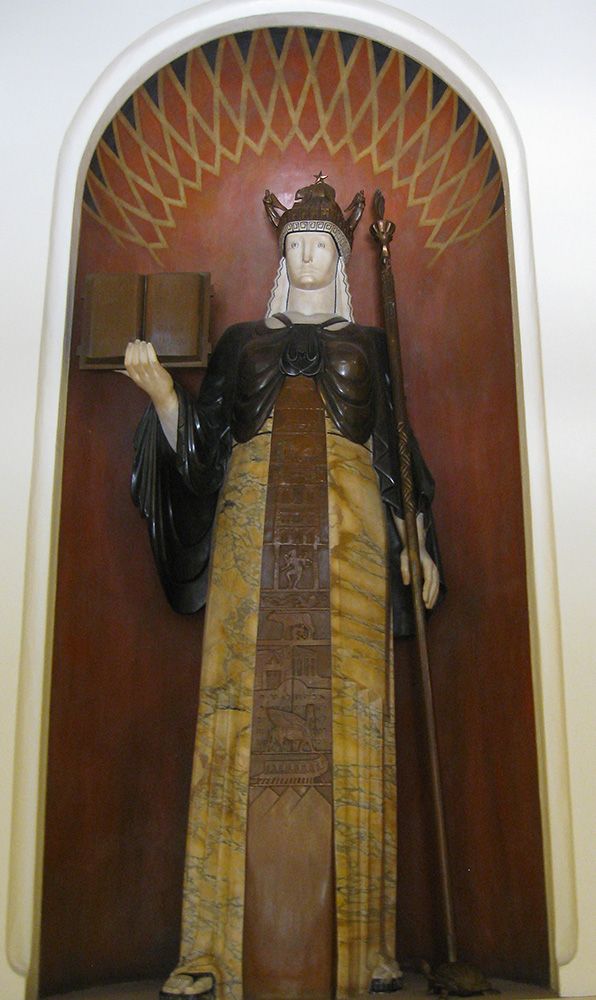 What are your initial thoughts about the future at Central Library?
Mitnick: I would like to see Central more vibrant as a community library. There’s been a huge change in downtown in the last 20 years—the restaurant scene, the bars, the entertainment, the museums are all amazing. People live here now and at night they are out walking their dogs. We could host dog obedience classes in the garden. Or we could host quickie lunchtime seminars for all the business folks who come stampeding through the Library as a shortcut. We haven’t yet done much in our role as a community center for this downtown population. I would like to learn the needs of those folks, learn the demographics, and get them in the Library.

What are some of the challenges facing Central Library?
Mitnick: One issue with Central is that our subject departments are so rich—the collections and the depth of knowledge of the librarians are amazing—but you have to wander way down the atrium and up and down many floors to find them. People often ask, “Where are the books?” I want to highlight the treasures in the subject departments to lure people in.

I would like to do some things that are unexpected and exciting—like a “Day of Making” at the Library. “How do I do it? How do I make it? How do I find out about it?” All of those questions that people have can be explored. Every subject department can be in charge of putting on programs all day long like a festival. For instance, the Science and Technology department has all of the cookbooks and gardening books and computers. You could go there to learn how to de-bug your computer, or make the perfect piecrust. I think folks are hungry for that hands-on interaction. It would be fun, and people could discover something about the endless possibilities of the Library.

Your mother was a librarian—she even held one of the same positions as you: Coordinator of Children’s Services! You obviously inherited a love for books, but what do you find inspiring about libraries?
Mitnick: Libraries feel like home to me. That feeling of safety and a complete world of possibility in which you could read anything you wanted—I was a big bookworm and I loved that feeling that you could walk in and everything was totally open to you. Ray Bradbury spent a lot of time at Central just reading and learning and writing, and he and I approach libraries in the same way—it’s this bountiful feast to be devoured.

Changing America: The Emancipation Proclamation, 1863 and the March on Washington, 1963
December 11, 2015 to January 29, 2016
A traveling exhibition on tour at Central Library, Getty Gallery 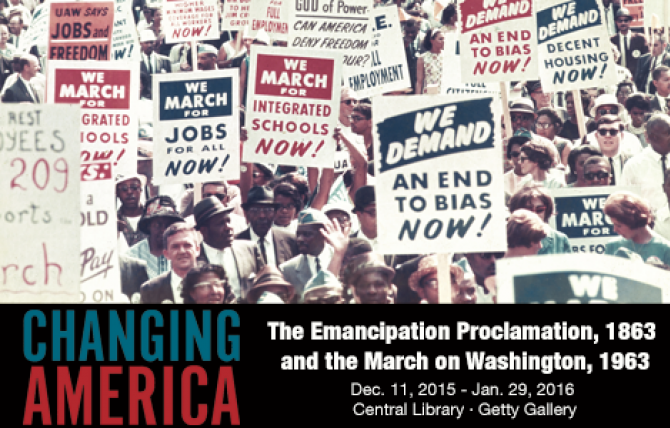 One hundred years separate the Emancipation Proclamation and the March on Washington, yet they are profoundly linked together in a larger story of liberty and the American experience. Created to commemorate these two pivotal achievements on their 150th and 50th anniversaries, Changing America is presented by the Smithsonian’s National Museum of African American History and Culture and the National Museum of American History in collaboration with the American Library Association and the National Endowment for the Humanities.

The Los Angeles Public Library has supplemented the exhibit with images from its Shades of L.A. and Rolland J. Curtis Collections, capturing a peek at the everyday lives of African American communities in the first half of the 20th century, after the signing of the Emancipation Proclamation and leading up to the March on Washington. The Library Foundation recently secured funding from The John Randolph Haynes and Dora Haynes Foundation for the digitization of the Rolland J. Curtis Collection.

Coming this winter:
State of Deception: The Power of Nazi Propaganda
March 10 to May 8, 2016
The United States Holocaust Memorial Museum’s special exhibit on view at Central Library, Getty Gallery as part of its national tour,
State of Deception promotes new understanding about the nature and consequence of propaganda. The exhibition illustrates the Nazis’ use of the latest, most sophisticated technologies and techniques to disseminate propagandist messages, and it asks us to consider the lessons of this history and its implications for today.