The Library Foundation has spent the last year envisioning the role of the 21st century library by launching a range of special projects that celebrate the rich history and culture of Los Angeles in today’s world. Before we head into 2014, we wanted to share some highlights from these projects that we hope have offered Angelenos a chance to experience our city in new and unique ways.

Songs in the Key of L.A.

Over the summer, this special project brought to life the Los Angeles Public Library’s sheet music collection, including the publication of Angel City Press’ beautiful anthology curated by USC Professor Josh Kun. The First Floor Galleries of the Central Library also opened an exhibit of 46 pieces of the cover art from the sheet music, and ALOUD hosted Kun and GRAMMY-winning L.A. band Quetzal for a look at L.A.’s musical history. Listen to the podcast here.

The project closed with what Los Angeles Times Pop Music Critic Randall Roberts called “a truly memorable moment, one that many in attendance won’t forget.” East L.A. band Ozmatli and fellow artists took the stage at Grand Performances to resurrect the historic songs from the collection. The evening featured special guests Stevie Wonder, Jackson Browne, and Cheech Marin filling the California Plaza with a new take on its SoCal roots.

Check out KCET’s Artbound special series for short films documenting the new recordings of songs from the collection below, and download some of the songs here.

Whatever Happened to Moby Dick?

Throughout the fall, the Library Foundation teamed up with the Los Angeles Public Library to invite readers to take a look at Herman Melville’s masterpiece through a Southern California lens. Over 90 librarian-created events across the city offered Angelenos of all ages to chance to interact with the great white whale, including a special reading of Moby Dick by actor, comedian, and Melvillian enthusiast Patton Oswalt. 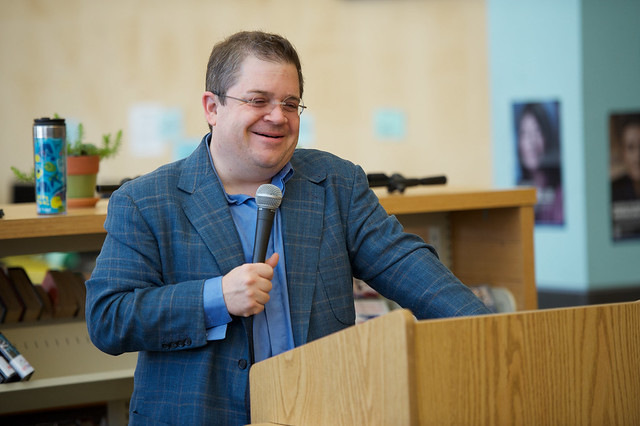 Over 200 folks took part in the Summarizing Moby Dick Twitter Contest winners, which offered hilarious and thoughtful micro takes on the epic story, including this favorite:

The project culminated with “My Moby Dick,” a grand finale of theatrical performance, sea shanties, and cutting-edge science at the Broad Stage, including a special film by the directors of Little Miss Sunshine, Jonathan Dayton and Valerie Faris. Watch parts of this video here, including food critic Jonathan Gold’s retelling of eating whale balls.

Lost & Found at the Movies

This fall, we debuted a new series celebrating the art of cinema and the vitality of film culture. Curated by John Nein, senior programmer for the Sundance Film Festival, the program is eclectic in theme and varies in form, exploring how we lose ourselves and find ourselves at the movies. The first installment unearthed some historic photos of theaters from the Library’s archive and featured Los Angeles Times and NPR Film Critic Kenneth Turan talking about how and where we watch films in L.A.

Check back with us in the new year for upcoming special projects, including the next installment of Lost & Found at the Movies.