History of Violence: A Novel

“Édouard Louis uses literature as a weapon,” says a recent New York Times profile of the internationally bestselling French author. Louis, whose highly acclaimed first autobiographical novel, The End of Eddy, confronts both the institution of discrimination as he experienced it first-hand, growing up in a small town in Northern France where he was bullied and forced to conceal his homosexuality and as well, the violence perpetrated on his hardscrabble community by an indifferent state. Now in his second book, the writer delivers another unsparing examination of survival—this time the story of his own rape and near murder by a stranger on Christmas Eve in 2012. In History of Violence, Louis copes with his post-traumatic stress disorder as he moves seamlessly and hypnotically between past and present, between his own voice and the voice of an imagined narrator to understand how such violence could occur. In a conversation with Steven Reigns, Louis examines his own complicated search for justice in a political system that marginalizes its citizens through class inequities and leaves entire communities vulnerable, powerless, and feeling neglected. 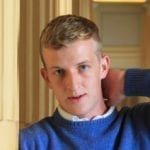 Édouard Louis is the author of the international bestsellers The End of Eddy and History of Violence, and the editor of a scholarly work on the social scientist Pierre Bourdieu. Compared to Jean Genet by The Paris Review, his work deals with sexuality, class, and violence. Louis was born Eddy Bellegeule in the working-class village of Hallencourt in northern France, and he attended the École Normale Supérieure and the École des Hautes Études en Sciences Sociales. 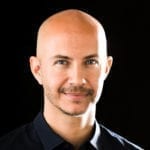 Steven Reigns was appointed the first Poet Laureate of West Hollywood. Alongside over a dozen chapbooks, he has published two poetry collections. Reigns holds a BA in Creative Writing, a Master of Clinical Psychology, and is a thirteen-time recipient of The Los Angeles County’s Department of Cultural Affairs’ Artist in Residency Grant. He edited My Life is Poetry, showcasing his students’ work from the first-ever autobiographical poetry workshop for LGBT seniors. Currently he is touring The Gay Rub, an exhibition of rubbings from LGBT landmarks, facilitates the monthly Lambda Lit Book Club, and is at work on a new collection.

History of Violence: A Novel

History of Violence: A Novel/Photos 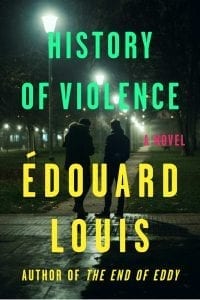